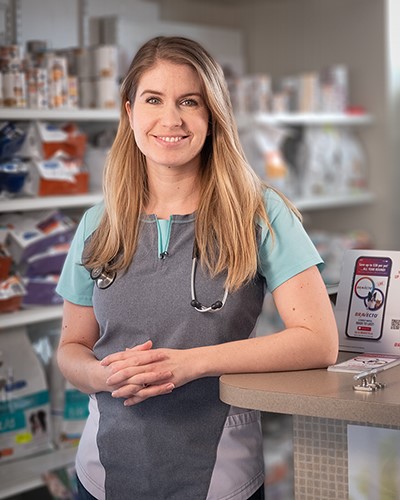 Dr. Malone attended Mount Allison University where she received a bachelor’s degree in animal biology. She graduated from the Atlantic Veterinary College in 2014. After graduation, Hannah moved to Alberta and worked at a small animal practice before becoming the lead veterinarian at the Wood Buffalo Humane Society. In 2019 she moved back to the island to join the Montague Veterinary Clinic family. In 2020, she and her husband Scott Malone became the proud new owners of Montague and Souris Veterinary Clinics. She is passionate about preventative medicine and client education. Hannah is a member of the PEIVMA and the CVMA.

Hannah grew up in Nova Scotia before moving to PEI for school where she fell in love with the island. She lives in Montague with her husband Scott, sons Carter and Thomas and their Boston Terrier named Stevie. 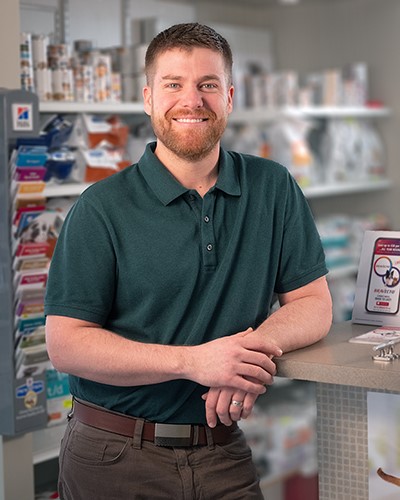 Scott Malone graduated with a diplomat in Engineering at UPEI in 2008. He then relocated to Alberta to work at an Engineering Consulting firm and eventually moved up into a management position. Business and management have always been a passion of Scott’s early on. He was born and raised in PEI and in 2019 moved back home to become an office manager at the Montague Veterinary Clinic. In 2020, he and his wife, Dr. Hannah Malone became the proud new owners of Montague and Souris Veterinary Clinics.

Scott lives in Montague with his wife Hannah, sons Carter and Thomas and their Boston Terrier named Stevie. He is a proud member of the Montague Volunteer Fire Department. 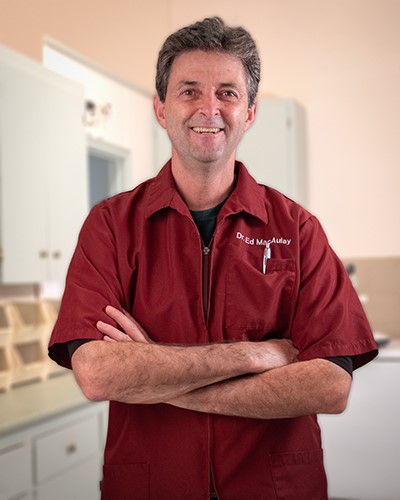 Dr. MacAulay graduated from the Nova Scotia Agricultural College in 1983. Ed spent his early years working as a swine research and embryo transfer technician. He returned to school and graduated from Atlantic Veterinary College in 1991. He entered practice at Montague Veterinary Clinic and remained to become an owner until January 2020. His practice has always been as a small and large animal veterinarian. Dr. MacAulay has a special interest in bovine, equine, canine and feline reproduction, medicine, and surgery. Aquaculture, small ruminants and exotics have also been a part of everyday practice. He is part of the PEIVMA, CVMA, CETA and ABPA.

Ed was born and raised in Souris and currently shares his home with his wife Eileen, dog Darla and cat Riley. They have four children, Daniel, Ryan, Marina and Melissa. 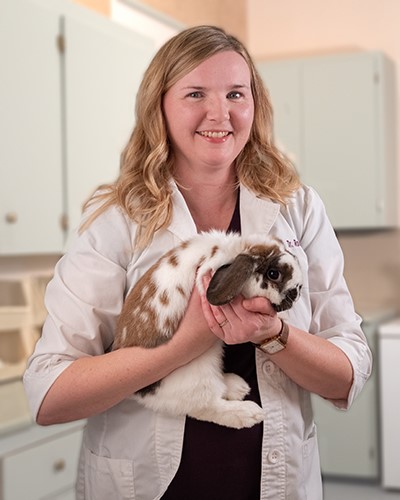 Dr. Garrett graduated from the Atlantic Veterinary College in 1998. Rose Mary has a specialty in acupuncture and completed acupuncture training at the International Veterinary Acupuncture Society in San Diego. She worked at Abegweit Animal Hospital from 1999-2016 and has been at Montague Veterinary Clinic since 2013. Rose Mary was the Agriculture Education Coordinator at the PEI Agriculture Sector Council from 1999-2012. She is a member of the PEIVMA, CVMA, IVAS, AAVSB and a PEICA board member.

Rose Mary was born and raised in Kings County. Her, her husband Billy and their five children Daniel, Michael, Gabrielle, Harrison and Julianna enjoy their small farm where they raise Herefords, sheep and Holland Lops. 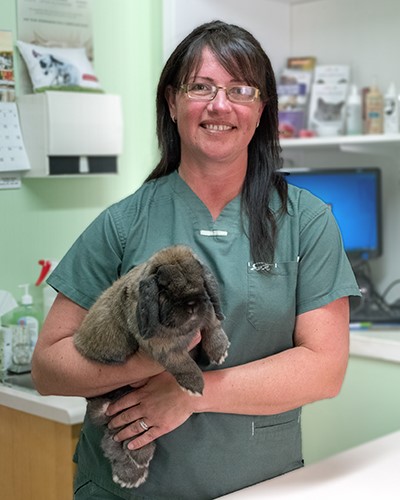 Angela was born and raised in Kings County and shares her home with her husband Derek and four sons, Mathew, Brett, Ty and Landen. They have a horse, two goats, two dogs, a cat and a rabbit. 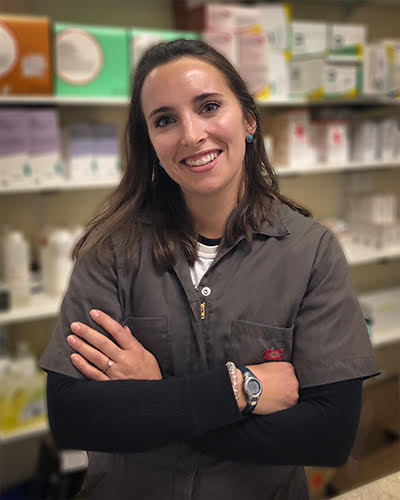 Dr. Fraser graduated from the Atlantic Veterinary College in 2016 after completing her BSc in Biology at UPEI. Helen was born and raised on her family’s dairy farm, Frahill Holsteins, in Belnan Nova Scotia but quickly fell in love with the island when she was completing her education. She worked at New Brunswick Provincial Veterinary Service in Moncton NB from 2016–2020. Helen has a special interest in dairy production medicine and is a part of the CVMA, AABP, CABV and APBA. Helen and her fiancé Jordan Stetson share their home in Alexandra with their Bernese Mountain dog Ridley. 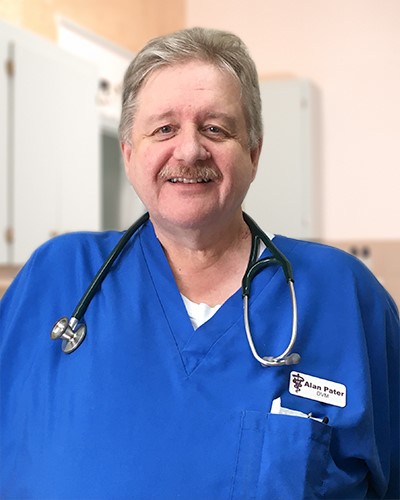 Dr. Pater graduated from the Atlantic Veterinary College in 1991. He worked at a practice in St. John’s Newfoundland before opening his own practice, Topsail Road Veterinary Clinic in Mount Pearl, NL. Twenty-five years later he sold his practice to return home to PEI. Retirement was not his goal so when a chance to practice at Montague Veterinary Clinic was offered, he gladly accepted. Dr. Pater has a special interest in cardiac cases, preventative medicine and client education. He is a member of the PEIVMA and the CVMA since 1991.

Alan is an islander who currently lives in Cornwall with his wife Lorie. They have two thirteen-year-old cats named Jack and Alexander. 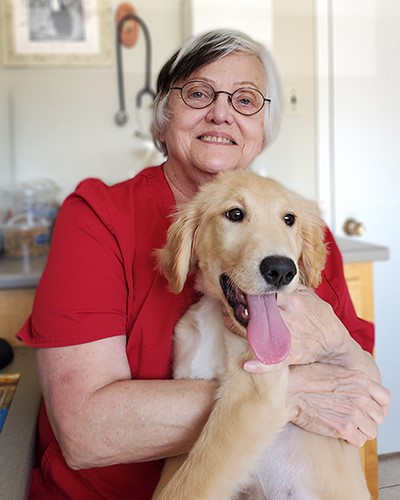 Dr. Runyon obtained her BSc from Marymount College in Kansas. She then worked as a Medical Technologist for two years at Denver General Hospital. To follow her dream of becoming a Veterinarian she became a surgery technician for Dr. Donald Piermattei (author of multiple surgery texts books) prior to entering Colorado State University - College of Veterinary Medicine where she obtained her DVM in 1977. After graduation, she returned home to New Jersey where she worked in private practice. Within a year she accepted a Small Animal Medicine & Surgery Internship at Iowa State University. Immediately upon completion she was offered her Surgery Residency in Small Animal Surgery and accepted into the Master of Science Program at Iowa State University. Her official title is Veterinary Orthopedic Surgeon which means she completed all the surgery requirements for both a one-year Surgery Internship and then a four-year Surgery Residency program.

Dr. Runyon spent four years as an Assistant Professor of Orthopedic Surgery at Iowa State University before accepting the Associate Professor of Small Animal Surgery at the University of Prince Edward Island - Atlantic Veterinarian College in 1986. Dr. Runyon served as the Chief of Small Animal Surgery and a tenured professor until 2012. Dr. Runyon has numerous publications and awards for teaching and service. Dr. Runyon has worked as a consultant for Montague Veterinary Clinic since 2012. 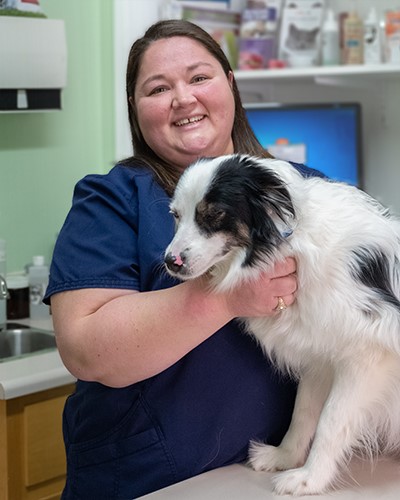 Michelle graduated from the Animal Health Technology Program from the Nova Scotia Agriculture College in 2007. After graduation Michelle worked at Amherst Veterinary Hospital in Nova Scotia and Westmoreland Veterinary Hospital in New Brunswick. From there she moved back to the island and worked at the Atlantic Veterinary College until 2014 before joining our team at both Montague Veterinary Clinic and Souris Veterinary Clinic. She has been a member of the EVTA and RVTTC since 2007. Michelle has a special interest in nutritional consultations and theriogenology.

Michelle was born and raised in Kings County and currently shares her home in St. Teresa with her husband Chris, her two sons Alec and Owen as well her Australian Shepard JuJube, her Tabby cat Ace and her three miniature horses Molly, Bosco and Breyer. 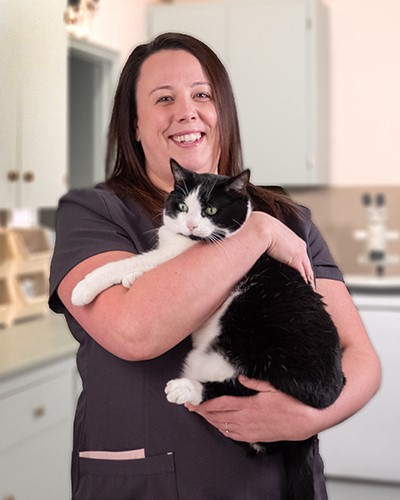 Krystina graduated from the Veterinary Technician program at the Miramichi Career College in New Brunswick in 2007.

Krystina worked at Brudenell Animal Hospital and the Atlantic Veterinary College before joining our team at Montague Veterinary Clinic in 2013. She has a special interest in surgery, critical cases and ICU.

Krystina was born and raised in Vernon River and shares her home with her husband Logan, her three children Kolten, Brooklyn, David and their cat Claymore. 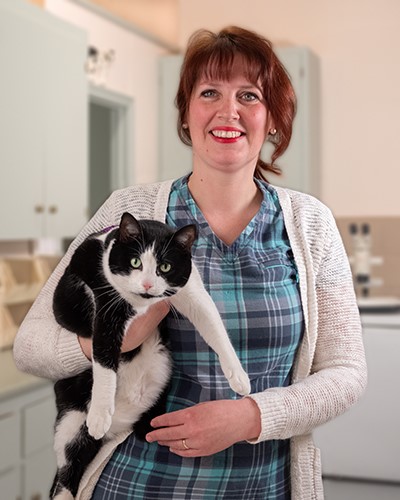 Christine has been a certified Pet Groomer since 2006 and has been part of the Montague Veterinary clinic family since 2007. She has a special interest in pet hygiene and nutrition. Christine lives in Kings County and shares her home with her husband Mike, two children Mickey and Emma Kate, their dog Gus and hamster Lou. 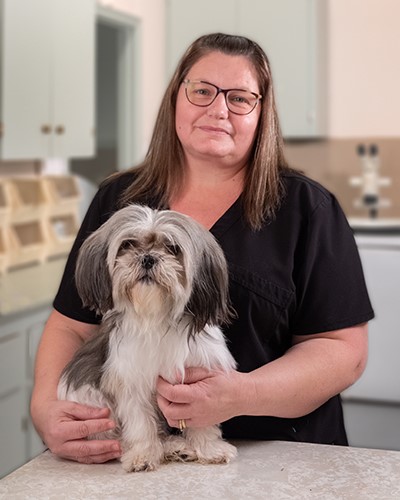 Jocelyn has over 20 years of retail experience and enjoys interacting with clients. She has a special interest in nutrition and animal welfare. Jocelyn was born and raised in Montague where her and her husband Jerry live with their six children, Morgan, Cody, Koltan, Jaxson, Abbie and Alyssa. They share their home with three Shih Tzu's, Tanzy, Toby and Teka as well as a cat Princess.